A “Scary” Revelation At A Roadway Incident….. 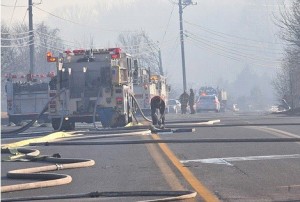 Over my many years in the fire/rescue service (47 to be exact), I have worked a lot of traffic accidents both on secondary roadways as well as the 32 miles of Inter-state highway that runs through my County. I would have to admit that I am the most apprehensive working these types of incidents than any other emergency call to which I am involved. This was brought clearly home to me just last week while directing traffic on the Interstate at a serious single-car accident. I arrived in my POV just minutes behind the engine, rescue and ambulance. The engine had taken a blocking position to protect the firefighters and EMS personnel assigned to extrication and patient care. I stopped my vehicle short of the accident to protect the scene and preserve the skid marks for law enforcement investigators as well as to establish some traffic control management on this very heavily traveled highway.

Incident command implemented a traffic management plan designed to merge the dual lanes into a single path of travel in order to further strengthen a “safety zone” around those crews actively working the scene. Cones were set up a comfortable distance away from the site which provided ample time for traffic to merge and safely maintain a continuous and orderly flow of vehicles. Firefighters, including myself, were positioned every several hundred feet along the merge pattern to in-sure control of any confused, distracted or “rubbernecking” drivers. Did I say “rubbernecking” drivers? Man, Oh man, have times changed!

It used to be that emergency responders only had to deal with drivers simply not paying attention or slowing down to ask if anybody was killed. But, I was shocked that today responders have to deal with “half-wits” behind the wheel taking photographs and even videos while traversing the accident scene. Out of nearly four thousand vehicles passing this particular accident scene, I lost count of the vehicles whose drivers were engaged in picture taking. In one car, I observed the driver and the passenger both taking pictures. Are you kidding me?

According to the National Highway Traffic Safety Administration, “at any given time during daylight hours, over 800,000 vehicles are driven by someone using a hand-held cell phone.” The NHTSA also has identified three (3) main types of distraction: 1) Manual: Taking hands off the wheel; 2) Visual: Taking your eyes off the road; and 3) Cognitive: Taking your mind off the road. Unfortunately, taking videos and photos with one’s cell phone of an accident scene while driving are really quite stupid.

I don’t know of any training that provides instruction for first responders dealing with this kind of distracted driver…Do you scream at them? Do you beat on their vehicle to get their attention? Short of actually stopping traffic for hours, I don’t have a sound answer other than the following:

 Give yourself room to move out of the way of approaching traffic.

 Use plenty of cones or other scene devices to direct traffic patterns.

 Use clear and simple hand signals that are not confusing or can cause your intentions to be misinterpreted.

 Exhibit patience and civility rather than displaying “responder road-rage” to the traveling public….hard though that may be!

 Call for more law enforcement to assist in controlling the scene….blue lights are always good! The problem in rural areas like mine, law enforcement re-sources are limited, and we have to bear a primary responsibility for initial scene control.

The life of an emergency responder is dangerous and hectic at best. Please recognize that one of our greatest exposures is on the highway….responding to, operating on, and returning from incidents. Accident scenes are very stressful and distracting to the traveling public, so heightened attention, situational awareness and training are key to survival out there.