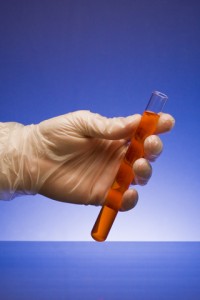 Researchers have developed a new blood test that can predict with 90% accuracy whether a healthy person will develop Alzheimer’s or cognitive decline within 3 years. They report how they identified and validated the 10 biomarkers that form the basis of the test in a study published in Nature Medicine.

“Our novel blood test offers the potential to identify people at risk for progressive cognitive decline and can change how patients, their families and treating physicians plan for and manage the disorder.”

Rates of Alzheimer’s disease – a condition that gradually clogs up and kills brain cells and leads to memory loss and mental decline – are rising rapidly around the globe. The disease mostly affects older people, although there are rare forms that can start earlier in life.

In 2010, there were 35 million people with Alzheimer’s disease worldwide. The World Health Organization (WHO) predicts this number will double every 20 years, rising to 115 million by 2050.

Ability to detect Alzheimer’s in preclinical stages is key

There are currently no treatments that cure or halt the disease, something scientists believe could be due to our inability to detect it before it has progressed to the point where there are clinical symptoms.

Prof. Federoff explains that while there have been many attempts to produce drugs that slow or reverse Alzheimer’s, they have all failed, and one reason could be because the drugs are tested at too late a stage of the disease.

Therefore, he and his colleagues focused on the preclinical stage of the disease, looking for biomarkers or telltale molecules that begin circulating in the blood before the disease takes hold.

Every year for 5 years the researchers tested memory and mental skills and blood samples of over 500 participants over the age of 70.

They then took the data of 53 participants who developed Alzheimer’s or mild cognitive impairment (MCI) and compared it with 53 who remained cognitively healthy. They used mass spectrometry to analyze the blood samples. This method is used to pinpoint the unique chemical signature of molecules.

They found 10 phospholipids – a type of fat that forms a major component of cell membranes – were present at consistently lower levels in blood samples of most of the group that developed Alzheimer’s or MCI. They validated their results in another group of 41 participants.

“The lipid panel was able to distinguish with 90% accuracy these two distinct groups – cognitively normal participants who would progress to MCI or AD within 2 to 3 years, and those who would remain normal in the near future.”

The researchers believe the 10 biomarkers in the panel they selected show signs of changes that occur when the membranes of brain cells begin to break down. Two of them have already been linked to Alzheimer’s.

They consider their findings represent a major step forward in producing a biomarker test that could be used for large-scale screening to find people at risk of Alzheimer’s or MCI.

Questions still remain, further tests needed
Would you want to know if you were going to get an incurable disease?

Though this is a potential breakthrough in diagnosing Alzheimer’s, it is still an incurable disease, which leaves an ethical question about whether or not patients would benefit from knowing in advance that they will develop an incurable condition.

Additionally, the 90% accuracy rate still leaves 10% open to question. NBC News reported that there were no “false negatives” in the blood test and quoted Prof. Federoff as saying, “We did not find any individual that didn’t test positive that became demented.” So, could 10% of patients receive a false positive?

“We’re intending to design a clinical trial where we’ll use this panel to identify people at high risk for Alzheimer’s to test a therapeutic agent that might delay or prevent the emergence of the disease.”

The National Institutes of Health and the Department of Defense funded the study.

Meanwhile, Medical News Today recently reported another study by researchers in the US and Australia, which found some Alzheimer’s biomarkers decrease as symptoms emerge. They showed that spinal fluid concentrations of three biomarkers proposed for Alzheimer’s are higher during the preclinical stage of the disease. The information could be very important for clinical trials of drugs to treat or prevent the disease.